Sidecar is a very important cloud native container design mode. It can create an independent Sidecar container by separating the auxiliary capabilities from the main container. In microservice architectures, the Sidecar mode is also used to separate general capabilities such as configuration management, service discovery, routing, and circuit breaking from main programs, thus making the microservice architectures less complicated. Since the popularity of Service Mesh has led to the prevalence of the Sidecar mode, the Sidecar mode has also been widely used within Alibaba Group to implement common capabilities such as O&M, security, and message-oriented middleware.

Application logs allow you to see the internal running status of your application. Logs are useful for debugging problems and monitoring cluster activities. After the application is containerized, the simplest and most widely used logging is to write standard output and errors.

However, in the current distributed systems and large-scale clusters, the above solution is not enough to meet the production environment standards. First, for distributed systems, logs are scattered in every single container, without a unified place for congregation. Logs may be lost in scenarios such as container crashes and Pod eviction. Therefore, there is a need for a more reliable log solution that is independent of the container lifecycle.

Sidecar logging architectures places the logging agent in an independent Sidecar container to collect container logs by sharing the log directory. Then, the logs are stored in the back-end storage of the log platform. 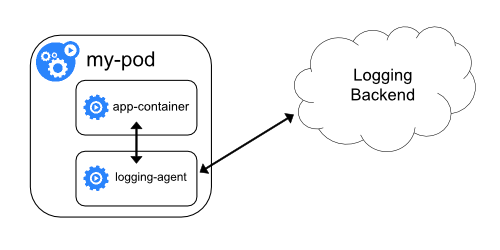 This architecture is also used by Alibaba and Ant Group to realize the log collection of containers. Next, this article will explain how OpenKruise SidecarSet helps a large-scale implementation of the Sidecar log architecture in Kubernetes clusters.

OpenKruise SidecarSet has implemented automatic Sidecar container injection based on Kubernetes AdmissionWebhook mechanism. Therefore, as long as the Sidecar is configured in SidecarSet, the defined Sidecar container will be injected into the scaled pods with any deployment patterns, such as CloneSet, Deployment, or StatefulSet. 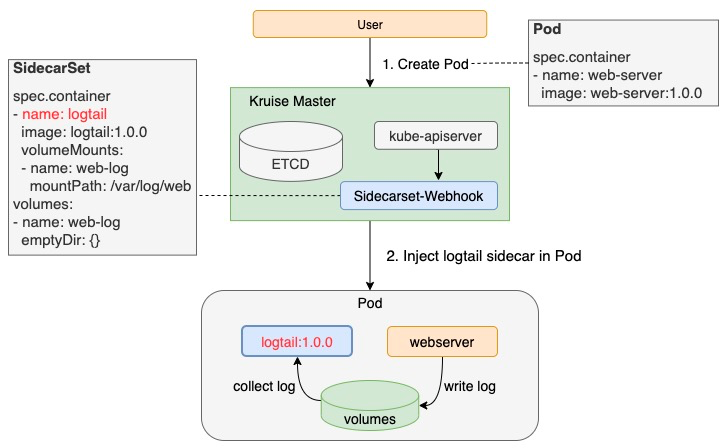 Note: The number of containers for the created Pods cannot be changed in the Kubernetes community. Therefore, the injection capability described above can only occur during the Pod creation phase. For the created Pods, Pod reconstruction is required for injection. 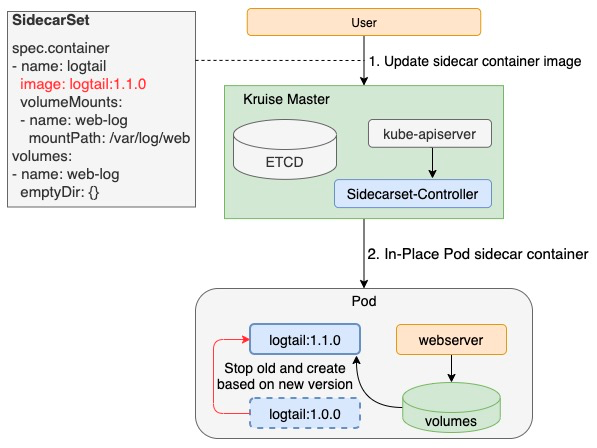 To meet the requirements in some complex Sidecar upgrade scenarios, SidecarSet provides the in-place upgrade and a wide range of gray release strategies.

Gray release is a common method that allows a Sidecar container to be released smoothly. It is highly recommended that this method is used in large-scale clusters. Here is an example of Pod's rolling release based on the maximum unavailability after the first batch of Pod release is suspended. Suppose that there are 1,000 Pods to be released:

The configuration above is suspended after the former release of 20 pods (1000 – 980 = 20). After the Sidecar container has been normal for a period of time in business, adjust the update SidecarSet configuration:

Partition indicates that the number or percentage of Pods of the old version is retained, with the default value of 0. Here, the partition does not represent any order number. If the partition is set up during the release process:

Note: The values of maxUnavailable and partition are not necessarily associated. For example:

The above configuration only releases the containers marked with canary labels. After the canary verification is completed, rolling release is performed based on the maximum unavailability by removing the configuration of updateStrategy.selector.

The upgrade sequence of pods in SidecarSet is subject to the following rules by default:

In addition to the above default release order, the scatter release policy allows users to scatter the pods that match certain labels to the entire release process. For example, for a global sidecar container like logtail, dozens of business pods may be injected into a cluster. Thus, the logtail can be released after being scattered based on the application name, realizing scattered and gray release among applications. And it can be performed together with the maximum unavailability.

Note: In the current version, all application names must be listed. In the next version, an intelligent scattered release will be supported with only the label key configured.

In the OpenKruise v0.8.0, the SidecarSet has been improved in terms of log management in Sidecar scenarios. In the later exploration of the stability and performance of SidecarSet, more scenarios will be covered at the same time. For example, Service Mesh scenario will be supported in the next version. Moreover, more people are welcomed to participate OpenKruise community to improve the application management and delivery extensibility of Kubernetes for scenarios featuring large scale, complexity and extreme performance.